The various branches of administration in Allahabad consist of the Municipal Corporation (Nagar Nigam), District Collector’s Office, Police Commissioner’s Office and the District and Sessions Court. The High Court and the Police Headquarters are also located in the city. 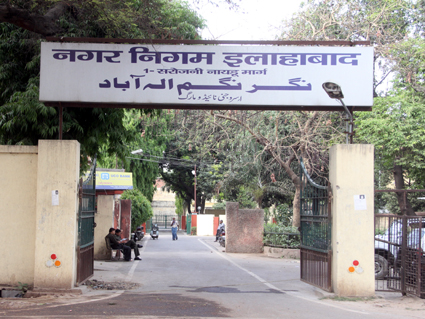 The Allahabad Nagar Nigam is at the apex of administration in the city and covers the Allahabad Metropolitan Region. It is a successor to the Allahabad Municipal Board and Improvement Trust which was dissolved in 1959. It headed by a Municipal Commissioner, an IAS officer, who is assisted by an Assistant Municipal Commissioner. Its functions include collection of property tax, development and maintenance of roads and footpaths, solid waste management, construction of drains, planting of trees, establishment of libraries, street lighting, preventing adulteration of food and issuing of licences. The Allahabad Nagar Nigam has established the Prayag Library on Mahatma Gandhi Marg, has modernized slaughter houses and the meat market on Kaatju Road and is in charge of arrangements during the periodic Kumbh Melas. It also offers online filing for birth and death certificates.

The departments of the office of the Additional Director General of Police include Provisioning and Budget, Housing and Welfare, Arms and Ammunition, Stationery and Office and Equipment and Pensions. The headquarters also houses a rare collection of old documents and seals.

The Police Commissioner’s Office is located at: Katra, Allahabad -211002
Get the complete list of police officials of Allahabad, right here

The Allahabad High Court, established in 1869, is one of the oldest courts in India. Presently, there are 160 judges at the High Court.

The periodic Kumbh Melas in Allahabad require elaborate arrangements. For a short period a small city crops up to attend to the lakhs of pilgrims who make their way to the city. The administration has to gear up to put in place. In 2013 the Mela lasted for 55 days and attracted one crore visitors. More than 12, 0000 state police were pressed into service and 30 police stations were set up in the area. Water to the tune of 80,000 litres and electricity of 30 MVA was supplied. Temporary hospitals and toilets were also set up. Roads were also laid and bathing ghats were built for the convenience of the pilgrims.