The largest park in Allahabad, Alfred Park is situated in the neighborhood of Georgetown at Allahabad, Uttar Pradesh behind the Allahabad Museum. It is a must-see destination for tourists, not only because of its size and beauty but also for the role that it played in the freedom struggle of India during the British era. A number of important attractions are also located around this park of the British times that was once informally also known as the Company Garden, as a reference to the British East India Company. It was originally known as Alfred Park, a name that is still in informal use at times. 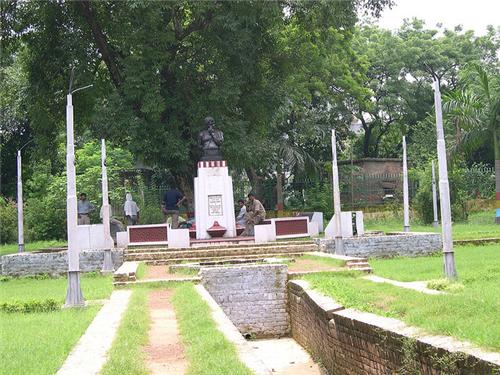 The park was built in the heart of the city in 1870 to mark the visit of Prince Alfred, the Duke of Edinburgh, to Allahabad. Spread over a sprawling area of 133 acres, the park later served as a venue for official ceremonies, often followed by musical performances by the Police Band. The entire construction of this park took 8 years.

The park contains a number of attractions for lovers of history. It comprises of a white marble canopy that serves as the memorial for Queen Victoria. The statue of George V, King of Great Britain and Ireland and emperor of India from 1910-1936, also stands here. The mosque ‘Sandal Shah and Gulab Shah Dargah’ is also situated within. Other important attractions located within the premises of this park include:


But the highlight of the park is arguably a huge statue of late Indian freedom fighter Chandra Shekhar Azad who gave his life inside its premises in a fight unto death with the British Imperial Police.

The park achieved a historic significance in the Indian struggle for Independence from nearly 200-year-old British domination. In the years preceding India’s Independence in 1947, the nation had become politically unstable. Freedom fighters used extremist as well as pacifist means to free the nation. Chandra Shekhar Azad, an extremist leader, was dreaded by the British government and the Imperial Police for his skill and strategies. Tipped off by one of his close friends, the British police surrounded the park when Azad was having a meeting inside with a close aide Sukhdev. An hour-long gun-battle ensued, in which Azad fought valiantly with the police. In the end, an injured Azad shot himself with his last remaining bullet but not before he had made the chance for Sukhdev to escape and killed three policemen alone. After Independence, the place was rechristened as Chandra Shekhar Azad Park. A statue of Azad was erected in the spot where he died. History seems to come alive when you visit the tree behind which Azad hid while fighting the police.

Allahabad offers a number of hotels close to the park where you can stay.