Allahabad is one of the culturally richest cities of India, located in Uttar Pradesh. The city has a vast number of attractions for its visitors, which include temples, museums, parks and forts. Allahabad Fort is one of them. Built by Emperor Akbar of the famous Mughal Dynasty, the fort is a popular tourist destination in Allahabad and is controlled and used by the Indian Army. Only a section of the fort is now open for the tourists. It stands on the banks of the river Yamuna near Sangam, the confluence of Saraswati, Ganga and Yamuna rivers. 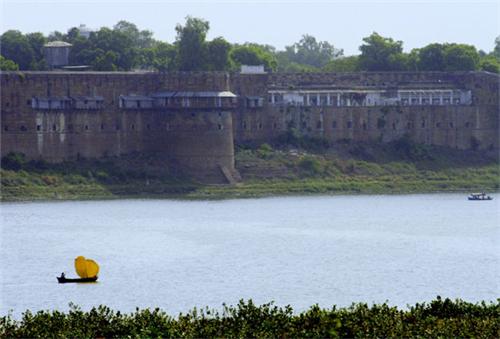 Built in 1583 by Emperor Akbar, this is the largest fort and was unmatched by construction, design and architecture in its heydays. It is also fabled to be originally built by Emperor Asoka and only repaired by the Mughal Emperor in 1583. In the mid-1800s, when India was ruled by the British East India Company, the fort served as an Army garrison. Munitions were stocked at this place and it served as an impregnable headquarter for the local Army unit. A railway line was separately constructed by the Company, with the aim to dominate Central India from this place. Presently, the Indian Army occupies this place which has given it the name Ordnance Depot Fort Allahabad. It is due to this reason that civilians are given only restricted access to the inner quarters of this fort.

This 16th century fort is majestic in build and comprises of huge walls and three gateways. The outer wall is still in a good condition and can be viewed well if you take a boat ride along the river Yamuna.

It is inside the temple complex that the huge Banyan tree resides. According to a popular belief, whoever jumps from this ancient tree would be able to attain immortality. Civilians are not allowed to view the tree. It is situated close to the south wall and can be seen from outside the wall, among many other trees. The tree finds mention in a lot of scriptures and even in the travelogues of Hiuen Tsang.

This polished sandstone structure is 10.6 m tall and is inscribed with royal edicts, that date back to 232 BC. Every year, the fort is visited by thousands of visitors from across the country as well as various parts of the world. During the Kumbh Mela, it serves as the Command Centre and its location on the banks of the Sangam makes it even more practical for such purposes.