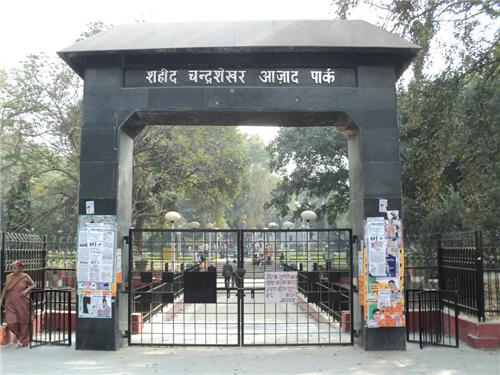 The park was constructed in the heart of Allahabad in 1870, to mark the visit of Prince Alfred to the city. During the times of British rule in India, the park often witnessed music performances of the Police Band that were preceded by official ceremonies. It gained a nation-wide significance for Indians and a monumental place in the history of Indian struggle for Independence from the 200-year-old British rule.

Role of Park in Indian Independence

On 27th February, 1931, famous patriotic leader Chandra Shekhar Azad – who was feared by British authorities for his extremist ways of freedom-fighting – came to the park to meet an accomplice named Sukhdev (another great freedom fighter). Tiwari, one of Azad’s close friends, had already tipped the police about this visit in return for money. The park was soon surrounded by policemen working for the British government and Azad fought valiantly to let Sukhdev escape. After a gun battle, in which he managed to kill three policemen and was shot himself in the thigh, Azad shot himself in the head with the last bullet in his pistol to keep his promise of never being caught alive. After Independence, the park was named Chandra Shekhar Azad Park. Azad's statue was erected in the spot of his death.

A public library, attached to this park, contains more than 75,000 books and valuable manuscripts. Important matches are played in the stadium known as Mahmana Madan Mohan Malaviya which is located in the center of the park. Next to the park lies the Allahabad Museum where rare photographs of Azad are kept. It also preserves his Colt pistol in full view for visitors today. One can also see colonial style buildings here, which remind of the life and times of the bygone British era in India. A music training institute called Prayag Sangeet Samiti is also located nearby.

If you stay nearby, you can just take an auto, rickshaw or cab from the hotel and come here. One can visit this park at any time of the year. It is open on the following days:

If you love history and wish to get a taste of old India, Chandra Shekhar Azad Park will thrill you with its background and enthrall you with its charm of a bygone era.