India is one of the most religious nations and nearly every nook and corner of this vast country boasts of a place of worship. The holy city of Allahabad also prides in its grand places of worship, of which the Hanuman temple is one of the biggest. The temple is a major attraction for pilgrims, due to its proximity to Sangam – the confluence of the three holy Indian rivers Ganga, Yamuna and Saraswati. Located close to Allahabad Fort, this unique temple houses a huge idol of the monkey-God Lord Hanuman which is about 20 feet long and 8 feet broad. 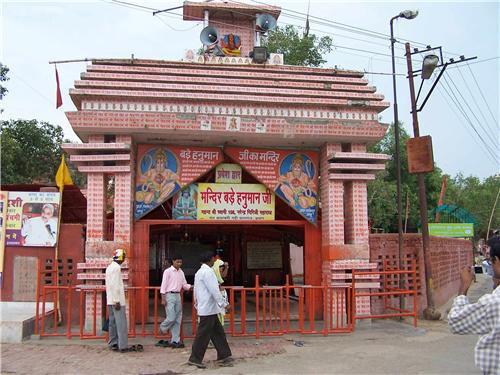 The present temple was built in the year 1787 and later renovated in 1940-41. A Shivling was earlier set in the same spot where the idol now rests. It was later replaced by huge idol of Lord Hanuman, who is described in the great Hindu epic ‘Ramayana’ as the close aide of Lord Rama – an incarnation of the supreme Hindu deity Lord Vishnu. Within the temple, idols of the following Hindu gods are also enshrined:

How to Reach Hanuman Temple

You can reach the temple by the following ways:

By Air - You can land at the Bamrauli Airport from nearby cities, such as Delhi, and take a cab from here to reach the spot.

By Road - You can visit this place by road by taking a car for hire or by a UPSRTC bus from the adjoining cities of Uttar Pradesh. The national highways 24B, 2, 27, 96 and 76 connect Allahabad to the other parts of India.

You may stay at any of the following hotels which are located very close to this temple:

The months from October to March are the best to visit this temple. The weather is very cold at this time but is free from rainfall, which offers you a pleasant condition to visit the temple as well as other local attractions. Make sure that you take enough woolen clothes along to combat the cold weather and keep cough and cold away.