A Nagar Panchayat and a town in the making, Koraon is located in Allahabad District of Uttar Pradesh.

Koraon has a population of over 12,137 as per the 2001 census conducted by the Government of India. Contrary to the dismal sex ratio in some other towns of the region, Koraon has 53% male population and 47% female population. 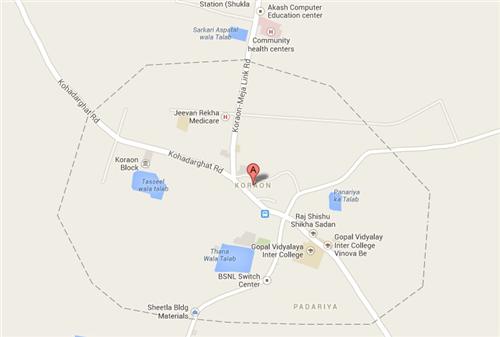 The region has subtropical climate which is a common feature in cities and towns of the state of Uttar Pradesh. The town and its surroundings witness three seasons including summers, monsoons and winters. Temperature in summer varies between 40 and 45 degrees while monsoons offer some respite from the chilling heat. The temperature falls by 5 to 7 degrees generally during the monsoons.

Summers last from April to June in the region and lead to advent of Monsoon which spreads out from early July till late September. Winters are extremely harsh in the region as the entire belt has to witness dense foggy conditions. Temperatures usually drop down to the freezing point during this period.

The region falls in the district of Allahabad which is primarily an agricultural hub in the state of Uttar Pradesh. Agriculture has been taken as an occupation by people in the rural area of Koraon as they grow Pulses namely Arhar, Urad and Chana besides wheat and some rice.

The children including the youth in Koraon have quality education at their doorsteps as some Inter Colleges have been operational in the region. These include the Gopal Vidyalaya Inter College Koraon which offers quality education in different streams and has been churning out talented youth who have made their mark in various fields.

As the town has a budding entrepreneur population which is engaged in business and other commercial activities, it is but natural that the town has comprehensive banking facilities. United Commercial Bank or UCO bank has a branch in Koraon which deals and caters to major business dealings of various stakeholders. Bank of Baroda is another major bank which has its branch in Koraon town.

Whenever in the region, plan a visit to Koraon as you will be able to get a glimpse of the traditional rural life of Uttar Pradesh.

Admission can also be sought at Sardar Patel Inter College in Sikaro, Koraon. With a range of options to choose from, quality education is available in Koraon and this reflects in the aspirations of the society in general at Koraon.

Arts, Commerce and Science streams are available in these inter colleges and once the students complete their course work at these Inter Colleges they can further seek admission at Graduation level to pursue their dream of becoming a thorough professional.