Known as the world’s largest gathering, Maha Kumbh Mela is a Hindu religious event celebrated in India once every 12 year in Allahabad. Irrespective of religion, caste and creed, this festival is attended by everyone. The importance this gathering has on the Indian culture was first explained by Hiuen Tsang, a Chinese traveler, who said that these Melas have been held since ancient times and famous poet Mark Twain had stated in 1895 that it is the magnificent power of faith which brings people of all kinds together on such an occasion. 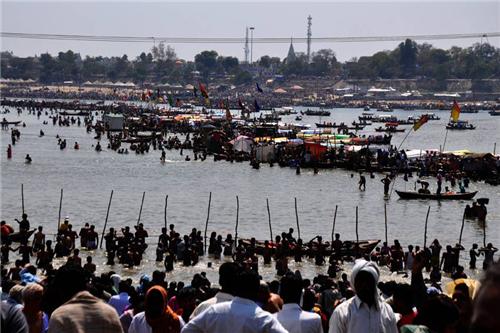 Shivratri Celebrations during Kumbh Mela in Allahabad
It is the historical importance of this event which makes it auspicious. Hindu mythology details that the devas or the gods lost their power due to a curse cast on them by a saint. In order to obtain the lost power, Lord Vishnu suggested the devas to churn the Ocean of Milk or the Kshira Sagar and to obtain Amrut or Nector of Immortality. The devas were advised to consume the Amrut because it would make them immortal. Powerless devas sought the help of the demons for the task who agreed but under the condition to have an equal portion of the nector. The desperate gods agreed to this condition.

After the churning of the ocean and obtaining the Amrut, the gods stepped back from their promise to share the Amrut. The later part of the story has different versions, one of which is that, a war struck between the devas and the asuras and the devas were chased by the demons. To help the gods, Lord Vishnu attained the form of Maya Mohini who tricked the demons and ran away with the Amrut. 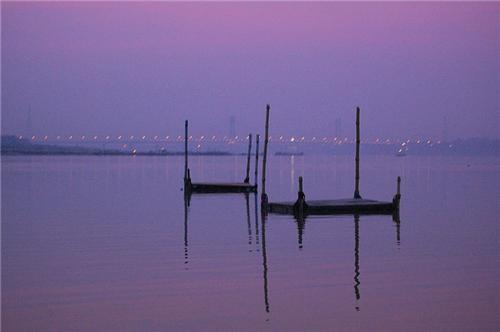 Triveni Sangam during the dawn. It is the point where the holy rivers Ganga, Yamuna and Saraswati meet.
Another version says that Jayanta, the son of Indra, was entrusted the custody of Amrut. Jayanta was chased by the demons and while escaping he took rest at 12 different places. Four of which were in earth. Similarity between the two versions is that, the guardians of the nectar dropped drops of it at 4 different places: Haridwar, Ujjain, Nasik and Prayag or Allahabad. Both Lord Vishnu and Jayanta, depending on the story were chased for 12 days according to God calendar or 12 years according to human calendar. Thus at these locations Kumbh Mela is celebrated 4 times every 12 years. However, Kumbh Mela is not celebrated at all locations at the same time, but on rotational basis, all 4 cities host the gathering once in 12 years.

In order to determine the location and date of the gathering, several astrological criteria have to be met, i.e. the presence of Jupiter, Sun and the Moon on the different star signs: Aquarius, Aries, Sagittarius, Leo, Cancer and Capricorn. Kumbh Mela is celebrated in Haridwar when Jupiter is in Aquarius, Sun in Aries and Moon in Sagittarius and when both the Sun and Moon are in Capricorn and Jupiter in Taurus then Kumbh Mela is celebrated in Prayag. Maha Kumbh Mela is celebrated every 12th year because Jupiter completes a complete round in 12 years and the planet comes in congregation with the 3 stars once in 12 years. Adding its significance, both Lord Shiva and Jayanta where chased for 12 human years. 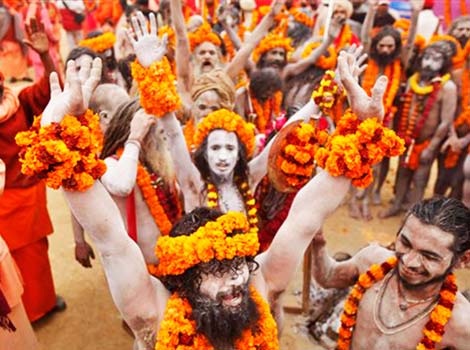 The Naga Sadhus cover themselves in ash and wear nothing but a garland.
The main ceremony in a Kumbh Mela is the bathing ceremony or also known as Snans. It is said that taking a dip in the holy rivers surrounding the 4 places will relieve the deceased family generations from their sins and stop the rebirth cycles. At Prayag, Snan is held at the convergence or Sangam of the 3 rivers: Ganga, Yamuna and Saraswati, thus making it superior than the Snans held at Haridwar, Ujjain or Nasik. Sangam is also special due to its references in Vedas, Mahabharata and Ramayana. It is said that Lord Ram stayed in an ashram at the Sangam sometime during his 14-year exile.

Irrespective of the type of Kumbh Mela celebrated, they are crowded with saints of different kinds. Naga Sadhus are ones who smear themselves in ash and never wear clothes. These saints have long matted hair and are never affected by extreme climatic conditions. Urdhwavahurs are people who subject their bodies to severe austerities. Parivajakas are saints who are determined to remain silent and carry tiny bells and use them to clear others off their path. Saints who meditate throughout the day and night standing on their head are called the Shirshasins. Kalpvasis perform rituals at the banks of the river on the complete month of Kumbh and bathing thrice a day. No Mela, especially Maha Kumbh Mela is missed by any of these saints. The main attraction at Maha Kumbh Mela is Naga Sadhus, who lead the parade to Sangam. 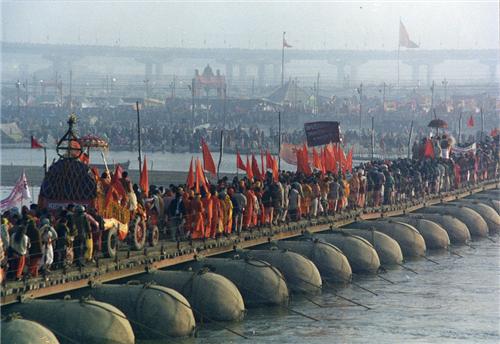 The procession to the Sangam.

The day at Maha Kumbh Mela begins with the procession led by Naga Sadhus, who wear nothing but a garland and cover themselves in ashes. The queue of the holy bath is setup at dawn or some time the night of the previous day and the ceremony continues until every devotee has completed their bath. Amongst many bathing days, the most significant is when the ritual is performed on the day of Mauni Amavasya. Mauni Snan is considered as royal bathing day or also called as Shahi Snan. This day is observed on a No Moon day during month of February or Magha. On this day, it is believed that sun and moon come in conjunction. In 2013, Maha Kumbh Mela, the Mauni Amavasya Snan was on February 10, 2013. Other than this bathing day, 2 more Shahi Snans are also observed. the first Shahi Snan is usually the first day of the Maha Kumbh Mela and the last Shahi Snan is the 5th day of new moon. A dip in the Ganga is considered to relieve the pilgrim from their temporal bondage and attain spiritual salvation and to become one soul with the God. 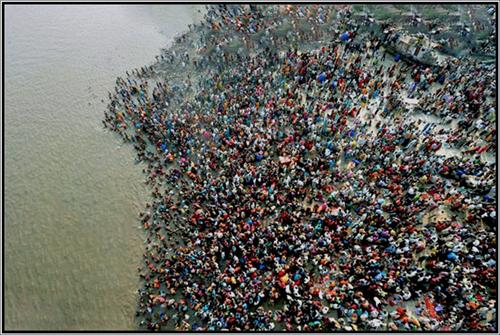 Risk of losing your life or loved ones does not stop one from participating in such a holy event. Despite the stampedes, the counts of the pilgrims attending the Mela never decrease any time. Witnessing the Naga Sadhus and soaking oneself in the Sangam is a once in a life time opportunity for few.