If you had spotted far too many identical faces at Mohammadpur Umri... do not feel tricked... it is in the air. This unassuming village tucked behind the Air Force base, Bamrauli, Allahabad has been creating ripples with its phenomenal ratio of twins.With a population of 6,000 in this village, there are a 106 pairs of identical twins, which is the highest in the world. 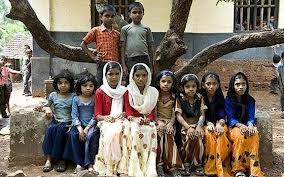 A predominantly Muslim village, both Hindus and Muslims live in peaceful coexistence, and the occurrence of monozygotic twins is not restricted to any particular community. Umri is not a village with a lush green back drop, perhaps it’s dry, dusty, thatched roofs, broken buildings, may not be quite appealing to one’s eye. Yet, this village is infested with many researchers and media from all over the world.

Medical enthusiasts and researchers have been trying to place an exact explanation for the spiked rate of twins being born in this village, and many have come with varied findings. The inference seems to be loosely held owing to many theories. Some attribute it to the inbreeding, some to the strong genetic factor - the ‘gene of hyperovulation’ handed over, while others say it could be because of the lifestyle, soil and water. The villagers strongly believe that a higher power is at work and that they have been the chosen or blessed ones. It is not restricted to just the human species alone, there have been many instances of hens laying eggs with double yolks, twins in buffaloes and cows too. There is another finding which says that twinning could be a result of the experimental machinery at the Air Force station, however, the Air Force station itself does not report any twinning.

People of Umri village say that had there been proper medical assistance available, there would have been more number of twins walking the streets. The infant mortality rate has been high due to lack of hospitals and doctors. There are a lot of complications even during pregnancy which seldom gets addressed and ends in premature birth or stillbirth.

Steady inflow of people pouring into this place for various findings has not brought about any change, the people of Umri feel dejected at the plight of their village, they say even the roads are in the same state it used to be 20 years back. Only one school is in place, medical facilities are abysmal. The only bright side is that, since it is right behind the Air Force base, there is a hassle free power supply and the children are fascinated to see the jets fly above.

Instances have been narrated by people, where these identical twins have made utmost use of this advantage, procuring one license for use by both, just one of them completing the assignment at school, tricking parents and more.

This place could very well be the genetic goldmine according to many researchers, many mysteries could be well resolved. With more basic amenities like proper roads, water, sanitation, more educational institutions and medical facilities the quality of life for the people belonging to Umri will get to see the light of the day.

While scientists work on fitting the baffling puzzles with the collected strains of DNA from Umri... parents, counterparts, sisters, brothers, neighbours of Umri continue to live with the daunting task of differentiating the twins, as the saying goes ‘anybody can deal with a crisis, it’s the day to day ordeal that wears out a man’.