The development of Naini as an industrial hub can be traced back to the Independence and the years immediately thereafter. Naini, a suburb of Allahabad, initially and solely came into existence for rehabilitation purpose of displaced people. This industrial colony was set up to bring relief to the uprooted refugees from East and West Pakistan. It was aimed to provide a living and job opportunities for the distraught who had become homeless overnight.

Naini was the succour to their wounded livelihoods and the thread to rebuild their lives. The location of the township, government support to the venture and finally the grit of the people helped the township stand up to its might in the later years. The aspect of connectivity in terms of rail and road was conducive for industries to flourish, thrive and sustain. With Allahabad gaining national importance all through this period, there was no looking back. Many people started settling owing to the good quality of life it promised. Prestigious educational institutions coupled with indigenous minds paved way for this satellite neighbourhood of Allahabad. 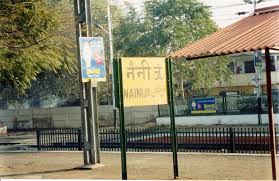 Naini has been a testimony for many landmark events in the history of India, it was at this place India got to witness the landing of the first Airmail Postal carrier in the year 1911.

Naini, a small town situated on the banks of River Yamuna, is self-contained, limited in size and almost independent of its parent city. It is the production-satellite neighbourhood with the capacity for industrial, commercial and production units which is distinct. Naini is connected to Allahabad in two ways, one being the older Naini bridge and the other ‘New Yamuna Bridge’ a recent addition which was built to meet up with the traffic crunch.

Many private and public sector undertaking companies run their offices and factories from this place. Few of the well-known industries include Alstom, Bharat Pumps & Compressors, ITI limited, Steel Authority of India Limited, Food Corporation of India. It also has many pharmaceutical companies like, Dey’s Medical, Shri Baidyanath Ayurved Bhawan, Indian Medical Pharmaceuticals and many more.

Many sugar, oil, flour mill and glass factories are dotted across the town. A sudden decline during the 1980s in these industries, forced many to move out in search of job opportunities. With Naini attracting many IT companies, it is inching towards becoming a major provider in terms of technology too. Due to the decision made by the Government of India approving the Allahabad-Naini-Bara investment zone backed by the World Bank, Naini is all set for a growth trajectory. 3000 hectares has been proposed for industrial development.

In spite of the primary revenue coming from tourism and agriculture, the contribution made by the industries situated in Naini is noteworthy. Apart from the industries of Naini, another place which is worth the mention is the famous jail of Naini, where many freedom fighters were imprisoned during the freedom struggle.

Millions on this very auspicious occasion throng the Naini railway station. There are several bathing spots that are staged and cordoned off for the purpose of ‘holy dip’ at Naini during the Kumbh Mela which eases out the problem of overcrowding. Travelling inside Naini is not a big ordeal, one can avail the services of local auto rickshaws and cabs at nominal charges.

Allahabad and Naini are often referred to as the twin cities, Naini in spite of not having an edge over Allahabad in terms of expanse, still continues to make a generous contribution to the economic aspect of the country.

Explore more about About Prayagraj