Located on the banks of Yamuna River, Naini is one of the most important places in Allahabad Division, Uttar Pradesh especially for the existence of Naini Central Prison, Allahabad. Situated at a distance of 7km from the Allahabad Railway Station this particular jail was built during the British times. Managed by Uttar Pradesh Police this particular jail has an overall capacity of keeping 3000 prisoners. 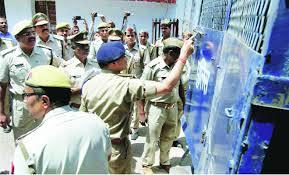 The importance of Naini Jail in Allahabad first came into rise when India was shouting for its Independence. It became more prominent when eminent leaders from various parts of the country where kept prisoners during the British Era for revolting against British Raj. Freedom fighters like Motilal Nehru, Govind Ballab Pant, Rafi Ahmed Kidwai, Narendra Dev were all imprisoned in this jail of Allahabad for quite a long period.

Even Pandit Jawaharlal Nehru who was the first Prime Minister of India was also imprisoned in this Jail twice in the year 1930 and again in March 1945. It was in 1941 that Mahatma Gandhi visited this jail premises calling freedom fighters who were imprisoned like Abul Kalam Azad and Vijayalakshmi Pandit. Last but not the least Indira Gandhi, daughter of Pt Nehru, and later Prime Minister of the country was imprisoned with husband Firoze Gandhi on September 11, 1942 and was released not before May, 1943. This proves the importance and implications of this Jail in India’s history of Independence. The information on activities of the freedom fighters in this Jail though cannot be fetched but a small glimpse of the life of Pandit Jwaharlal Nehru can be fetched from his letters to his daughter Indira Gandhi from jail premises published in Glimpses of World History.

Naini Central Prison is an open Jail with high security where many high end criminals are kept as of the present date. Many members of Parliament, high-end shooters, gang leaders, world-renowned criminals of Jaish-e-Mohammad and Lashkar-e-Taiba are imprisoned in Naini Jail premises. In 2008, there was news of high numbers of lifetime imprisoned inmates asking for euthanasia from the President of the country. Again in the same year there was news of many prisoners falling seriously ill of water-borne disease, tuberculosis, cancer etc in a span of few months.

Apart from this ill news about the Naini Jail in Allahabad, a host of good facts also come about the Jail authorities. The most pleasant and encouraging news is the fact that the inmates of Naini Jail are utilizing their time behind the bars in pursuing education. About 14-15 prisoners inside the jail premises are MBA and MCA who have taken the responsibility of educating other inmates and they have successfully convinced almost three hundred members of the Jail in educating themselves. There are opportunities of studying bachelors, masters and even diploma or certificate courses on different subjects as per the interest of the inmates. There is also option of giving exams which makes the education complete. As per the senior Jail Superintendent Ambrish Gaur, “the scheme of education is yielding good results”.

Apart from these, programs are organized by the Jail inmates during festivals. Here, the prisoners are given learnings on ways to become a good law abiding citizen of the country, to respect and love other inmates and live peacefully.

Naini Central Jail Allahabad has been an important part of the country’s history and today also serves as a major reformation centre.

Explore more about Administration in Prayagraj