Allahabad, also popularly known as Prayag is one of the largest metropolitan cities in Northern India, located in the state of Uttar Pradesh. This city has acquired fame as one of the oldest cities in the world and hence there are a lot many tourist places to visit in this city. Allahabad Darshan gives you a complete insight of the beautiful mesmerizing architectural styles and different historical monuments from different periods of Indian history, like the tomb of Khusru, which was built by Mughals, the All Saints Cathedral that was constructed by the British, Alopi Devi Mandir one of the ancient Hindu temples and many more. Now let us go through the fascinating places that are a must visit in Allahabad. 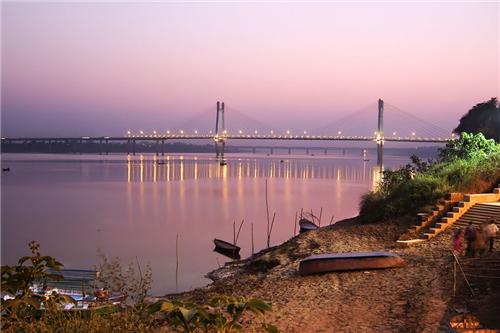 This is one of such mesmerizing architecture in Allahabad. This was constructed by Mughal’s Emperor Akbar in 1583.This spellbound monument is located on the banks of river Yamuna.  The evenings are the best time to visit this fort. The riverside view of the fort is something unimaginable and has to be experienced by one. This fort is currently under the control of the Indian Army and remains closed for the public. Those who really intend to visit this fort and enjoy the scenic beauty of the location have to have prior permission from the respective officer. To get the visiting pass, tourists can contact +91-532-2621854.

This mind blowing venue was constructed in the year 1662 by the Mughal’s Emperor Jahangir. This monument was built in the memory of the Emperor’s son Khusro.  Both the graves of Khusru and his wife Shah Begum were burnt in this garden. This garden has gotten an immense range of flora and fauna. The scenic beauty of this place has been attracting a large number of visitors every year. During mango season, visitors can find a huge heap of mangoes here.

This is known as the ancestral property of Nehru-Gandhi family. This was basically constructed by the Indian Political leader Motilal Nehru, which was back then famous as the new Nehru residence and the original manor was transformed into the Indian national congress headquarters. This huge bungalow in Allahabad has now been transformed into a museum, which contains the things that belonged to the Nehru-Gandhi family. This venue remains closed on Mondays, and it is a must visit place in Allahabad.

This is the most famous religious place in Allahabad, which every tourist who visits Allahabad does not tend to miss this. This is a sacred place where all the 3 goddess rivers Ganga, Saraswathi and Yamuna meet. The word Sangam means union and tri means 3. SO it is a holy place where all the 3 rivers unite. All the 3 important holy fairs, Kumbh Mela, Ardh Kumbh Mela and Maha Kumbh Mela take place in this sacred place during which we can find thousands of devotees who proofs the occasion

This is known as the longest hanging bridge in India. This cable-stayed bridge was constructed back then to minimize the traffic on the old bridge. This bridge connects Allahabad to its neighboring city Naini. The scenic beauty of this place is simply superb.

This is most commonly called as the Chandrashekhar Azad Park by the localities of the town. This park has spread over a wide area of 133 areas and has gotten immense flora and fauna. The scenic beauty of this park attracts a large number of visitors. It is the best place to spend an evening with family members and friends. This park was named after the great Indian freedom fighter Chandrasekhar Azad, who died here during the Indian Independence struggle in 1933.

This is one of the most religious Hindu temples, which is in the close proximity to the Allahabad fort. Visitors who visit here can witness the 20 feet long and 8 feet wide Hanuman Statue. The statue here has got submerged a few feet below the ground. As this beautiful holy temple of Hindus is situated on the banks of Yamuna river, it most of the time gets submerged in water whenever there is a huge flood.

This is one of such places or children present in Allahabad. This place is so informative and enhances the knowledge in children. This was built in the year 1979, and this is situated in the proximity to the Anand Bhavan.

This is one of the oldest universities present in Indian Continent. Its headquarters lie in the Muir central college, which was established by Sir William Muir, after whom the college has been named. During the period of time, it was called as the Oxford University of the East. This is one of the must visit place in Allahabad.

These ancient beautifully sculptured monuments of the Mughals have been attracting visitors every year, and there has been an exponential increase in the number of visitors who visit them every year. The best time to visit this city is the winters as there would be pleasant weather condition.

Kumbh Mela which was a cultural and religious festival has taken the shape of an international event. People from all parts of the world, castes and creed take part in this festival which is no more a simple fair anymore. its shape depends upon the curves of the scred river Ganges, wherever it takes a turn, the space left out is covered by the festival. This festival can be divided into Ardh Kumbh and Maha Kumbh melas. It is not a mere fair but a festival of asceticism, knowledge and devotion. A complete different society is seen when you visit the camps that are there beside the river. Chanting of vedic mantras, preaching of saints, smoke of Yagya and dances based on the mythological epics can be experienced when one visits Kumbha mela.

The music, the horse races, the nagas performing fights in Shahi Snan between the elephants and the traditional procession of the Akharas attract thousands of visitors from all corners of the world. the people who visit this place spend their days and nights in tents. The cold sand of Sangam and the open sky that is covered with fog does not deter their determination to offer their obesicances to their beloved Lord. The people also make donations with their full heart. Gold donation, cow donation, donation to manes and also secret donation forms a part of this festival.