Jawahar Planetarium is situated in Allahabad, Uttar Pradesh and is also commonly known as Allahabad Planetarium. Named after the first Prime Minister of India and inaugurated in 1979, it was built to promote scientific thought. The location of this planetarium is right next to Anand Bhavan, which was the residence of the Nehru family; Anand Bhavan is managed by ‘Jawaharlal Nehru Memorial Trust’. Every year, on the occasion of the birthday of Pandit Nehru, the prestigious ‘Jawaharlal Nehru Memorial Lecture’, where minds like Sam Pitroda, who is the advisor the Prime Minister of India on Public Information, Infrastructure and Innovation have previously lectured, is organised by the same institution. 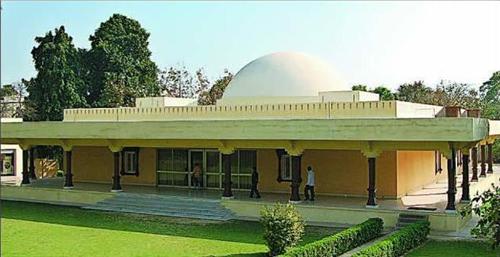 In a city with deep-rooted religious beliefs and historical value, along with many historical and cultural landmarks of immense importance, the Jawahar Planetarium holds its own. It has earned the distinction of being one of the most famous tourist spots in Allahabad and thus it brings about a confluence between science and technology and religious and cultural ideologies with ease in this very richly historical city.

To make this haven of knowledge more accessible, the management of the planetarium have kept the entry charges to a minimal Rs 20. This institution makes an effort to be open to the public 6 days a week from morning to evening. It is also easily reached, situated just 3.5 km away from Allahabad Railway Station, any local transportation like a rickshaw could be used as an ideal mode of transport.

The Allahabad Planetarium has been offering 5 shows daily featuring interesting and intriguing topics related to astronomy and space. A cosmic journey of the scientific kind by itself, the majestic beauty of the done theatre leaves visitors spell bound and enamoured by the vastness and beauty of outer space.

A visit to the planetarium is almost like making a trip into outer space and leaves one completely mesmerized. The Planetarium offers other interesting activities mainly aimed at making children more proactive towards science one of them being a model of the Moon and Jupiter that are situated in the hallway of the building. Probably the most fun activity for children and adults alike is the section where one can measure ones weight on the Moon and the planet Jupiter by standing on the models. The excitement of finding out one's weight on Jupiter is contagious and this is one attraction of the planetarium hardly anybody can resist.

On the educational front, regular lecture series are held for children above the age of 5 to educate and influence their young minds and make them more inclined towards the a life and career in science. These lectures cover topics as varied as space and astronomy and also technological development and history. The planetarium also sells books of an academic nature and various scientific models for children to be mainly used in projects and for personal knowledge. Events like the Sun and Moon eclipses and transits of planets and passing of comets are broadcast at the planetarium to be viewed by the public and at times even telescopes are made available for viewing a rare celestial happening.

Worth each and everybody’s time, The Jawahar Planetarium is a place one must visit on a trip to Allahabad. An experience of a lifetime, it would be a loss for anybody missing out on the magnificence of the Universe.