Presently serving as a museum for general public and a children’s art and craft centre, the Swaraj Bhawan is a special senior citizen travel attraction. Previously known to be the Nehru-Gandhi family ancestral house, the huge mansion is major tourist point having light and sound shows and a secret underground room used as a secret meeting room during freedom movement. 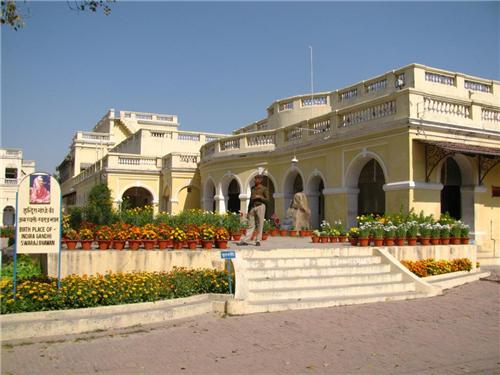 A prominent landmark in Allahabad and also in the freedom struggle on India, the Swaraj Bhawan is a huge landed property bought by Motilal Nehru in the 19th century and later became the ancestral home for the entire Nehru-Gandhi family and also served as a hub of Congress activity in the pre-Independence days. The mansion has weathered many historical events and the tides of time. When the house was bought, it was in a dilapidated condition and the next decade was spent to carry out extensive renovation works that result in its present condition. The house was later donated to the Indian National Congress by Motilal Nehru. Swaraj Bhawan was opened to the public as a museum in the late 1980s.

The house was originally owned by a 19th century Muslim educationist and leader and was expected to act as a seat of British Colonial rule in Allahabad. However, with the ownership moving to Motilal Nehru, ironically the purpose was entirely defeated and the house became the centre for planning freedom struggle activities aimed at ending the British rule in India.

Motilal Nehru being a ardent member of the Congress Party, a large number of famous party leaders and freedom activists frequently visited the house. Later, during the period of Jawaharlal Nehru, the house officially became the operative office for the All India Congress Committee and the centre for Independence movement for the region.

Swaraj Bhawan houses a display of various items related to the Indian freedom movement as well an adaptation of the British lifestyle of the pre-Independence era. The mansion has 42 rooms and one room was especially reserved for Mahatma Gandhi from where he conducted many operations. The room still has a charkha and other items of his daily needs. The other major attractions of the place are:


A light and sound program is arranged with four shows every day. The tour starts at the entrance, taking the tourists from one room to the other narrating the different activities carried out in the house during the testing times of India’s freedom movement. Tourists, especially senior citizens are known to like the show as they can better relate to the narrations.

Swaraj Bhawan is open for visitors all days of the week except on Monday. One can visit the museum from 9:30 in the morning till 5 in the evening.

Since the common mode of transport in Allahabad is rickshaws and auto rickshaws, one can easily hire one of these to reach the museum. Otherwise, cabs can be hired from the hotel. The railway station is only about four kilometres from the museum.

Since the summer is scorching in Allahabad, the best time to visit the city for public celebrations as well as sightseeing is from October to March.